QHow does damage differ between the Chernobyl accident and the Fukushima Daiichi Nuclear Power Station accident?
AThere are major differences. In particular, compared to the accident at Chernobyl Nuclear Power Station, the amount of radioactive substances released into the atmosphere was less, and no health impacts have been found arising from exposure to radiation.

According to the International Nuclear and Radiological Event Scale (INES), which is the international indicator for indicating the safety level of accidents or troubles in nuclear power stations, the accidents at Chernobyl Nuclear Power Station and TEPCO's Fukushima Daiichi Nuclear Power Station are equally assessed as Level 7. However, damage and impacts differ between the two.

The first difference concerns the conditions surrounding the respective accidents. In the case of Chernobyl, the actual nuclear reactor exploded and graphite in the reactor core burned, causing dispersion of a huge amount of radioactive materials for an extended period. In contrast, in the accident at TEPCO's Fukushima Daiichi Nuclear Power Station, nuclear fuel melted due to the disabling of reactor cooling. The resulting build-up of hydrogen caused a hydrogen explosion that destroyed the reactor building, however, the nuclear fuel remained intact inside its containers, while, gasified radioactive materials were released into the atmosphere.

The quantity of radioactive materials released into the atmosphere also differed between the two accidents. In the case of TEPCO's Fukushima Daiichi Nuclear Power Station, it is estimated that the discharged amount of nuclides with a relatively short half-life, such as iodine and cesium, which are important for considering health impacts,was only around 0.02-0.1%.

Furthermore, unlike the case of the Chernobyl Nuclear Power Station accident, public exposure to radiation has been suppressed thanks to the prompt evacuation of residents, monitoring of radiation levels, and implementation of restrictions on food and drink consumption, and health impacts have not been recognized in the case of TEPCO's Fukushima Daiichi Nuclear Power Station.
(Concerning health impacts, also see "Q. Are citizens of Fukushima Prefecture experiencing any negative health impacts?" and "Q. Isn't the number of cancer patients increasing in Fukushima Prefecture?") 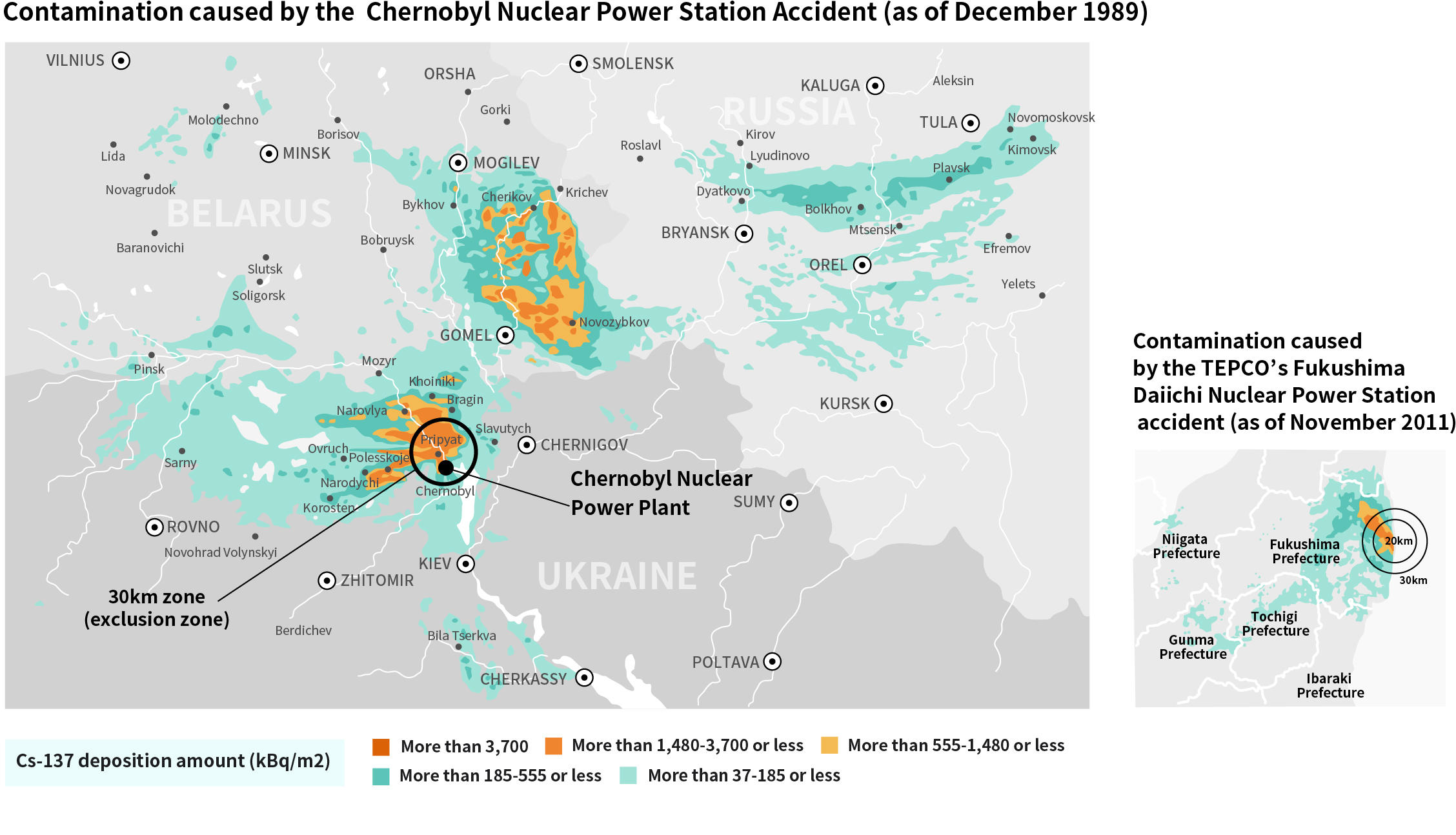 Ministry of the Environment Gov of Japan : BOOKLET to Provide Basic Information Regarding Health Effects of Radiation Chapter 2 2.2 Comparison of the scale of nuclear power plant accidents between Chernobyl & Fukushima Daiichi NPS Accidents(Japanese)

Ministry of the Environment Government of Japan : BOOKLET to Provide Basic Information Regarding Health Effects of Radiation Chapter 2 2.2 Comparison of Estimated Amounts of Released Radionuclides between Chernobyl and Fukushima Daiichi NPS Accidents

Reference
Ministry of the Environment Government of Japan: BOOKLET to Provide Basic Information Regarding Health Effects of Radiation